I set up my kit along the lonely logging road passing by the little pond. The area didn’t really lend itself to good camping.

As night fell, frogsong filled the still mountain silence. Throughout the evening sweet nothings were exchanged across the tannic waters, love was in the air.

When dawn broke, I began to cook up some coffee. During my patient wait for the water to boil, I gathered up the shredded bits of old lawn furniture, beer cans and pieces of an old TV set that befouled the space.

Just after the outfall of the small pond there is a fork in the road. I’d already gone one way, why not try the other?

Gaining a few hundred feet over about a half mile, I intersected with a road heading back up towards Burnt Mountain Ridge.

The route travels along another logging road above the ponds below. I’m sure it would have been a pleasant view, but when I was passing through, so was a whole lot of cloud.

I came to a rather wide corner which seemed the logical point to jump back onto the ridge to catch my route in. Took a break then traveled light along the road towards the summit.

On the way up it was so cloudy I could have been out on the coast and not known the difference. Though “white oblivion” has it’s own kind of charm.

The road ends below the summit, but with total cloud cover obscuring any long view, I thought I’d save it for next time.

As I traveled back down, soaking in the fog,  something caught my eye. The shimmering, snaking ribbon of the Carbon River appeared below my feet. What a sight!

I found a nice spot along the road next to some vigorous growing phlox where I watched and waited for windows through the otherwise opaque vapor.

GET ON GETTIN ON

While traveling through the forest along the ridge I saw a pretty promising trail and decided to follow it a ways, as it was heading down.

With a lot of semi recent cut work visible and a few scattered flags it was hard to pass up. However, it ended up in a cliffy section that I didn’t wanna hassle with. So I went back up a couple hundred feet to traverse to my route in.

Skirting the base of a couple talus fields along the way saved a lot of beating the bushes. In little time I was back at the landing and in for three miles of logging roads, and wouldn’t you know it? Now the clouds had broken! 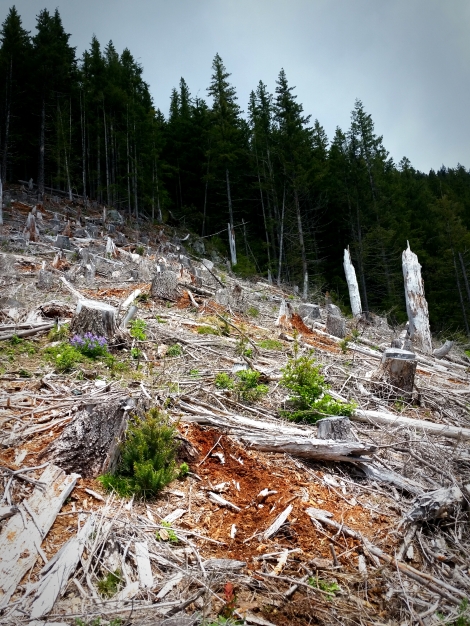 Not too much hub bub, besides the singing birds, the croaking chorus of mountain frogs… and the deer baby!

While I was coming down the hill a mama and fawn were coming up. She saw me and bounded up the hill, the baby was hiding in the ditch.

I knew this to be normal deer behavior, so was not concerned. I walked by quickly and quietly, taking a couple pictures as I passed, leaving baby bambi in peace.

It would seem to me that the best route to the summit road would be:

From the landing head uphill and east, gaining towards a pair of talus clearings at the 4000′-4200′ level, then traverse east until you run into a recognizable, but very steep trail to the road.

While the trip over the ridge to the ponds, you’d be better heading straight up the first talus field, and between the pair of bumps at the top. See map.

(The dip in the red track indicates where I followed that steep trail to cliffs, perhaps it continues beyond…)