The Damon & Pythias, one of the very first mines I ever visited and usually the first I bring folks to visit when they are just becoming interested in mines.

Before I ever even knew of the Discovering Washington’s Historic Mines series or really much of anything about mines, I stumbled upon a trip report to The D&P on 2drx.com , a great site with lots of trip reports and photos (unfortunately as of this writing the site is down, but hopefully it’ll be up again soon) 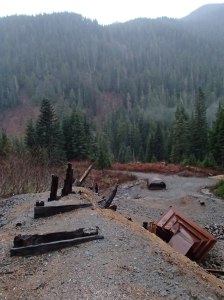 View from the adit

I remember being captivated by their pictures of the relics deep inside the mines depths and glued to every word I read as I imagined exploring the abandoned abyss.

They included a hand drawn map as well, which I printed out and carried along with me on that first trip.

Well, it’s been a long time since then, and I’ve visited the Damon & Pythias dozens of time since, and I keep coming back.

Simply put, it’s a combination of ease of access, mine complexity and abundant relics that keeps the D&P at the top of my list.

At a time in the not too distant past it was possible to drive all the way to the D&P (albeit with a high clearance vehicle) but the final 100yrds of the road have now been blocked, with future blockages coming in the future.

Deep in the Priestly Vein

One of the first things you’ll notice when you arrive at the site is a very large culvert pipe kinda just sitting there. As you approach further, the tailings pile and large rusted ore hopper will appear to your left.

Climbing up the tailings pile you’ll see another culvert piece, this one covering the adit a la Quonset hut.

The miners here were seeking gold and silver as well as lead found in the ores arsenopyrite, chalcopyrite, and galena. Samples of these ores can still be found in the mine and tailings pile today.

Ahem, upon entering, a dilapidated gate halfway blocks the door. I’m sure at one time it kept people out, but it’s purpose is much more passive these days. 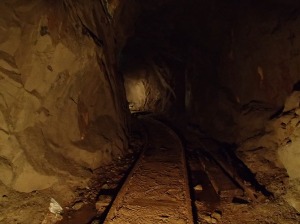 Walking along the cart rails, paralleling the drainage channel and old ventilation pipe you’ll probably begin to think “How deep is this thing”?

It’s not very long in either direction, the floor is pretty muddy, there are no artifacts and the rock looks…questionable. Typically I explore this one with a flashlight beam.

Continuing along the main tunnel you are again in store for a decent walk before coming to the next drift. This is known as the Damon Vein. You’ll immediately see a large rusted air compressor tank. It’s rivets speak of it’s age.

There some other debris of note in the area, but none more interesting than the huge wooden structure to your right.

As you approach the moldy wooden giant, you might notice that it sits directly below a very high raise. Shine your light into the darkness to try and see the top.

Also of note is the bucket from an ore chute, at one time this would be supplied with ore dropped from the raise above, once the bucket was filled, the handle pulled would have dumped the ore into a waiting mine cart. Good lesson to learn here, let gravity do the work.

The rest of this drift is mostly barren, but worth the walk.

Heading back down the other direction of the drift, one follows cart rails down a sometimes twisting tunnel, past a couple old ladders (broken in recent years, thanks geniuses) to an uneventful end.

Back at the intersection with the compressor tank you may have noticed a creepy door further down the main tunnel. Enter if you dare, but be warned, some say Dracsquatch (Dracula and Sasquatch’s unholy progeny) dwells beyond this point…. but I’ve never seen him, in fact I just made that up.

The tunnel continues on, and eventually the cart tracks give up the ghost, but not before passing a pile of rusted cable (Which is the last artifact of note from here on out) 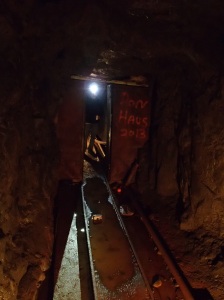 You’ll eventually end up at another large intersection. This is known as the Priestly Vein. The drifts here are slightly shorter than in the Damon Vein and largely uneventful.

The adit from the old rusty cables

Heading back to the intersection, turn off your light and look toward the adit, this tunnel is so straight, you will be able to see the tiny pin prick of light over a quarter mile away.

Well thats the Damon and Pythias, and I’d like to keep it that way so as always, leave everything just as you found it, take only pictures and leave only footprints.

Phew! Made it out alive

3 responses to “Damon & Pythias Mine”